YouTube has announced some new updates designed to further limit spam and misuse, including the removal of the option to hide channel subscriber counts, and a new increased strictness setting within its auto-moderation tools.

First off, on subscriber counts – right now, YouTube channels can choose not to display their subscriber count, which some users may prefer if they feel that it could turn away viewers or reduce credibility.

But YouTube has found that this option is also often used by channels impersonating platform stars.

“While we’re aware that some creators find this feature valuable, as YouTube grows, we found it is often used to impersonate channels. Bad actors often lure people to their channel page by impersonating other creators in comments. And now, channels will no longer be able to hide their subscriber pens on YouTube.”

So it’s not on the channels themselves that this is necessarily a problem, but if a user is impersonating a famous YouTuber in the comments, and they hide their subscriber count, that can make it harder for regular users to know whether this is the real person making a comment or not.

So now, these scammers will have fewer options to obscure their identity, as users will be able to see, straight away, that it clearly isn’t PewDiePie making a comment, as he has more than nine subscribers.

It’s a good update, and while some users would prefer not to have their subscriber count displayed, it seems like a small trade-off for increased transparency and security in the app.

But if you’ve been telling people that you have more subscribers than you do, maybe it’s time to shut down your YouTube account. Just claim that you were banned for your controversial opinions or something.

YouTube says that the update will go into effect by the end of July.

On another front, YouTube’s also giving channel managers more capacity to filter out junk comments, by updating the ‘strictness’ of the auto-moderation tool for their channel. 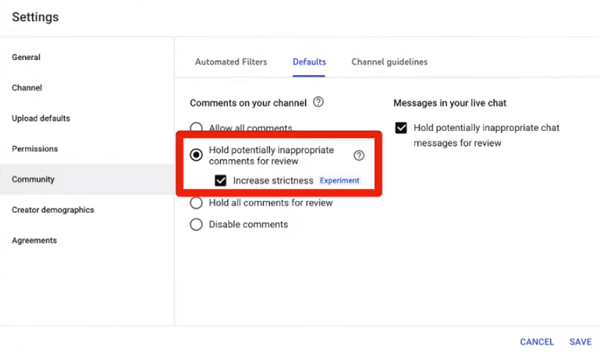 As you can see here, the new, enhanced strictness option will be available within your channel settings, with a simple checkbox to ‘Increase Strictness’.

“Turning on these settings will increase detection settings for potentially inappropriate comments and spam. With this new stronger setting, you should notice more spam and solicitations being automatically filtered under your Held for Review tab rather than making it through to your audience.”

Finally, YouTube’s also implementing new limits on the amount of special characters that people can use within their Channel name.

“Using special characters in channel names is another way that bad actors impersonate established channels. So we’re reducing the character set that creators can choose from when updating their name moving forward.”

Essentially, this will make it harder for people to impersonate channels by using characters that look like letters and numbers, which can create confusion, and facilitate misrepresentation.

These are all small changes in isolation, but they could have a significant impact as a whole, as YouTube works to combat bad actors looking to use its app to dupe unsuspecting users.

And at 2 billion users, the capacity for YouTube to be used for scams is significant, which is why every little step matters in this process.

Twitter Rolls Out ‘Branded Likes’ to Advertisers in the US, UK, Saudi Arabia and Japan