YouTube has added a new element that will give users a way to add update notes to their YouTube clips – which could save you from having to re-upload an entire video for the sake of a smaller change or correction.

Called, incidentally, ‘Corrections’, the new process will display an info card teaser in the video playback, to signal when and where a correction note has been added to a clip. 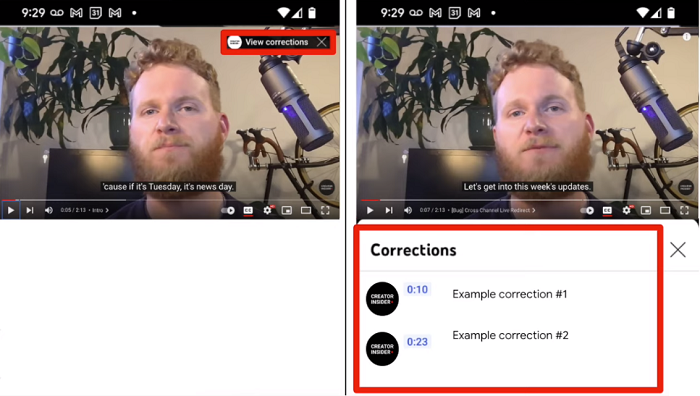 “Up until now, if a creator wanted to correct an error in an existing upload or provide an update to information that was no longer accurate, short of editing and re-uploading the video, resulting in loss of engagement metrics and comments, the options were limited to adding a note in the description, responding to comments calling out the error, pinning a comment or doing nothing. With the launch of Corrections, creators will be able to call attention to corrections and clarifications in the descriptions of their already published videos.”

As you can see in the example above, the new Corrections info card will show up at the top right of the playback window, at the timestamp of the first Correction in the clip. Clicking on the info card will expand the video description, where the creator will be able to provide a written correction or clarification based on the change.

So you can’t wholescale change your videos as a result of this functionality, it’s more of a supplemental notes feature to explain smaller errors and mistakes in your video clips.

But as YouTube explains, that could save creators from having to re-upload their clips – and it could be a particularly big help in adding important context to timely and evolving news-related videos shared in the app.

Creators could also use the option to direct viewers to newer clips on the same subject. So if you’ve posted a popular tutorial video on, say, a certain app or device, you could add a note that it’s since been updated via the Corrections marker, where you could also point users to your newer video on the topic.

It’s a relatively small, but potentially valuable addition, which could facilitate varying functionality in your YouTube process.

To add a correction to your YouTube clips, you can write “Correction:” or “Corrections:” within the video description, followed by the timestamp (00:00), and an explanation of your update. You can read more about video Corrections here.

Musk Plans to Meet with Twitter Staff This Week, as Takeover Deal Continues to Progress